Back in Pisa after 30 years

The International ACM Conference on Research and Development in Information Retrieval (SIGIR) returned to Pisa after 30 years for its 39th meeting. The conference was hosted in the Palazzo dei Congressi, a fantastic conference space just east of the centre of Pisa, alongside the river Arno.  Organised by General Chairs Raffaele Perego and Fabrizio Sebastiani, the conference ran from the 17th – 21st July, providing delegates with excellent weather for some sightseeing and to experience the Italian lifestyle.

This year’s edition had a controversial 62 long papers accepted out of 341 submissions, dropping the acceptance rate to just 18%, the lowest since 2010.  However, a large number of short papers, collection papers and demo papers lead to 2 separate poster sessions held on Monday and Tuesday after the long paper presentations. Interestingly, demo papers were trialling a new 4-page format, compared to the single page previously, which proved very popular among participants.

The two full-day tutorials covered very different aspects of Information Retrieval (IR). Unfortunately, Diane Kelly and Anita Crescenzi’s ‘From Design to Analysis: Conducting Controlled Laboratory Experiments with Users’ tutorial was not able to go ahead. As the title suggested, this tutorial was designed to provide information and advice on how to best conduct user studies for interactive IR, a very important topic in IR. The other full-day tutorial, organised by Simon Gog and Rossano Venturini, was ‘Succinct Data Structures in Information Retrieval: Theory and Practice’.  The organisers provide a website with all the details of the tutorial. In short, this tutorial was designed to introduce researchers to succinct data structures and their impact on research.

The five morning tutorials were; ‘Collaborative Information Seeking: Art and Science of Achieving 1+1>2 in IR’ by Chirag Shah, ‘Constructing and Mining Web-Scale Knowledge Graphs’ by Evgeniy Gabrilovich and Nicolas Usunier, ‘Deep Learning for Information Retrieval’ by Hang Li and Zhengdong Lu, ‘Online Learning to Rank for Information Retrieval’ by Artem Grotov and Maarten de Rijke, and ‘Temporal Information Retrieval’ by Nattiya Kanhabua and Avishek Anand. The afternoon consisted of the tutorials ‘Counterfactual Evaluation and Learning for Search, Recommendation and Ad Placement’ by Thorsten Joachims and Adith Swaminathan, ‘Instant Search – A Hands on Tutorial’ by Ganesh Venkataraman, Viet Ha-Thuc and Dhruv Arya, ‘Question Answering with Knowledge Base, Web and Beyond’ by Scott Wen-tau Yih and Hao Ma, ‘Scalability and Efficiency Challenges in Large-Scale Web Search Engines’ by B. Barla Cambazoglu and Ricardo Baeza-Yates, and ‘Simulation of Interaction: A tutorial on Modelling and Simulating User Interaction and Search Behaviour’.

Unfortunately space prohibits full details of this huge selection of tutorials but information on each can be found on the SIGIR web page, some tutorials have their own pages and slides are also available.

The Doctoral Consortium, hosted by Brian Davison and Kira Radinsky (who unfortunately could not be in attendance), featured 15 student presentations with a large range of IR topics being discussed by a set of bright PhD students. Brian was present along with a group of very helpful mentors to provide feedback to the students on their topics. The consortium had 2 best presentation awards, one for the morning presenters and one for afternoon. The morning award went to Dongho Choi whose presentation covered information seeking behaviour of both online and physical spaces. The afternoon award went to Mostafa Dehghani who is working on entity representation.

After a very packed and interesting day, Sunday evening played host to the Welcome Reception. The reception was held outdoors in Giardino Scotto, a beautiful park that was originally a fortress! With a selection of food and a seemingly unlimited supply of wine, the night was a roaring success, allowing everyone to catch up and discuss the interesting ideas they had heard during the day.

Monday saw the conference begin in full attendance. With a 9am start time, it was just as well the previous evening came to a close around midnight! The day opened with greetings from the general chairs before Christopher Manning launched into a fantastic keynote on the applications of deep learning in IR. The talk was both insightful and thought provoking putting forward the possibility that deep learning may be about to dominate IR as the numerous areas in which it could be applied were highlighted.

Following the keynote the conference broke into three concurrent sessions, making delegates wish they had brought their clones along to hear all of the interesting talks. The three sessions focused on Evaluation, Speech and Conversation Systems, and Retrieval Model. The evaluation session began with the very highly anticipated talk on statistical significance by Tetsuya Sakai. This talk investigated how we, as a community, use statistical analysis to prove significance of our results.  The work delved into how significance tests (or the lack of) can paint a false picture of significance when the sample size is not appropriate.

At the Student Lunch, Charlie Clarke, Ian Ruthven and Gabriella Kazai treated the attendees to three excellent talks.  Charlie told the students that he still hasn’t developed his 5-year plan, Gabriella suggested that students explore industry and Ian let everyone in on the secret as to why academics don’t work before 11am on Wednesday’s (allegedly). 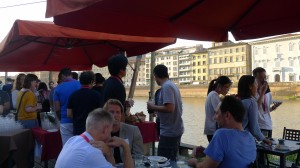 Student party: academics who brought along a student were allowed in

After the delicious and highly entertaining lunch the sessions split again to focus on learning to rank, music and math, and microblogs before the poster session later in the afternoon. Post poster session there was the Women in IR meeting, an informal meeting to bring together the women and the men in the field to discuss how to improve the gender balance of the community and attract more female researchers to IR.  The evening starred the student party at a nearby, scenic bar on the river Arno. This great evening gave the students a chance to socialise with one another, as well as with senior researchers and practitioners, and make new connections to be re-affirmed year after year at future SIGIR conferences.

Tuesday contained a very full program with three sets of three talks across the morning and afternoon covering everything from user needs to recommendation systems to (aptly) diversity. The late afternoon saw the second poster session take place as well the demo session in its new format. The session, chaired by Craig MacDonald, who also took on the roll of the timekeeper with his whistle, gave each presenter exactly one minute to entice delegates to their demos. A variety of approaches were taken, from promises of changing how we do IR, to more solid (or should I say liquid) incentives… 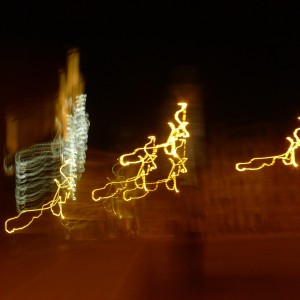 The famous blurred tower of Pisa (long after conference dinner)

The evening played host to the event everyone looks forward to, the social banquet. Being in Italy, expectations for the food were very high. The venue was the newly refurbished Arsenali Repubblicani, refitted from its original purpose of building galleys in the 1200’s to an excellent social venue. The evening started with a buffet of breads, cold cuts, cheese and plenty more while guests arrived and mingled out in the evening sun. One could feel the anticipation in the air for not only the food to come but to find out what Jaap Kamp’s choice of wardrobe for the evening was after his classic tulip and bright orange suits of SIGIRs past. Guests were moved inside for a delicious five-course meal before the awards ceremony and some live music to finish off the night. The organised half of the banquet was very well put together but some accounts report that the social aspect continued on till just before the Wednesday morning keynote…

The morning following the banquet may have been a struggle for many given the festivities and free flowing wine of the previous evening but luckily, there was an abundance of strong Italian coffee to energise those in need. Additionally, an exciting keynote by Vipin Kumar of the University of Minnesota was at hand to stimulate the mind. The talk centred on data mining a colossal amount of climate and ecosystem data to produce insights on areas such as detecting deforestation and forest fires. 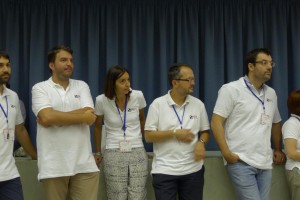 Exhausted after a long conference: thanks to an enthusiastic bunch of volunteers!

The sessions for Wednesday morning featured an industry track discussing how some of the big companies manage and leverage their big data, alongside a second evaluation session and an events session. The big companies session gave some welcome insight to the challenges big companies are facing now and how they are approaching solutions. Lunch also had a planned Business Meeting where members of the community could come together to discuss the industry focussed issues in IR. The afternoon had two more industry sessions involving smaller companies and later, modelling and evaluation in industry. Both of which were very well attended and gave further insight to those of us firmly placed in academia.

As the talks drew to a close, the conference closing gave an opportunity to thank all those involved and the chairs handed over the reigns to next year’s committee for the 40th SIGIR in Tokyo. Thus signalling the end of another outstanding SIGIR.

But wait, there’s more! Thursday played host to seven exciting workshops, some new and some recurring hits. The ‘Neural Information Retrieval’ workshop had a huge attendance in their first year as, like Christopher Manning predicted, there was a huge surge in interest in neural networks and their applications in IR. Other key areas of IR were visited and revisited such as Medical IR, Privacy Preserving IR, Search as Learning, Web Question Answering and Heterogeneous Information Access. The Gameification Workshop, hosted by Udo, Michael and Gabriella, was a hit once again and featured a very interactive approach to the workshop. Participants were able to view the presentations on their own device and post questions and ratings to the presenters as the show went on.

Throughout the day, goodbyes were said as some delegates left Pisa to return home. Other more fortunate ones left to begin their holidays in Italy everywhere from La Spezia to Venice and Turino to Naples. As we all know, SIGIR is a week of intense work and one deserves a holiday afterwards!

Colin is a PhD student at the University of Glasgow, he received his masters from the same institution whilst working as a Research Assistant with Leif Azzopardi. Following this position, Colin worked at Signal Media for 6 months as a Data Scientist before commencing his PhD. Colin has been working on the evaluation of bias in search and has been investigating the relationship between retrieval performance and bias to uncover whether reducing bias, improves performance.