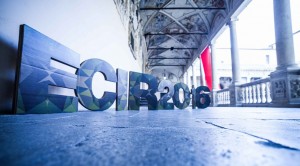 The 38th European Conference in Information Retrieval (ECIR), after 9 years of absence from Italy, comes back to Padua with an exceptional organisation made by the department of Electronic Engineering of the University of Padua, which did not disappoint any expectation. Padua, the learned Padua, gem of beauty and wisdom, is a city that stands on the Bacchiglione river in Veneto at just 30 km west from its chef-lieu, Venice. The fifth oldest university in the world, the loggia of the Palazzo Della Ragione, the world famous Scrovegni Chapel decorated by Giotto, the conviviality of the Pedrocchi Café, the elliptical shape Prato Della Valle square, the colours of the world’s first Botanical Garden, are just some of the things Padua offers to its visitors.

This conference edition had quite a number of submissions: 201 for full papers, 66 for short papers and 17 for demos, with an acceptance rate respectively of: 22%, 30% and 35%. These numbers in comparison to those of the previous years show two positive trends, an increase in submissions and a decrease in acceptance rate. The conference sessions were, on the first day of conference: social context and news, machine learning, question answering, ranking and, evaluation methodology; on the second day: probabilistic modelling, evaluation issues, multimedia, summarization, reproducibility and, twitter, and; on the third and last day: retrieval models, applications, information filtering, and the industry session.

This year ECIR also saw the exceptional prize-giving of two Karen Spärck Jones awards to Jordan Boyd-Graber and Emine Yilmaz, who both gave a keynote talk at ECIR. The talks are still enjoyable for your amusement online, thanks to the brilliant idea of the organisation to live stream all the plenary sessions, keynotes, and other sessions.

On March equinox, when spring starts in the northern hemisphere, at the Palazzo delle Geoscienze, the conference began with a full day of tutorials and workshops. A wide variety of hot topics in IR were here well represented; four half-day tutorials on: living labs for online evaluation (LiLa), collaborative IR, group recommender systems (GroupRecSys) and, real-time bidding based display advertising (RTBMA), and four full day workshops on: recent trends in news information (NewsIR), proactive IR about anticipating users’ information needs (ProAct IR), bibliometric-enhanced IR (BIR) and, modeling, learning and mining for cross/multilinguality (MultiLingMine). The most popular workshop was NewsIR with more than 40 attendees over the day. Main topics of discussion included the use of Twitter to enrich news collections to better study events over time, visualisations of news collections, and diversity of information provided by different sources.

The day ended with the welcome reception in the theme of a spring country festival that was held in the yard of the same building. Here, we found a wine tasting with professional sommeliers, not to mention ample food, the unmissable porchetta (Italian spit-roasted pork) and last but not least, two spontaneous cooks, Giorgio Maria Di Nunzio and Gianmaria Silvello that were delighting everybody who wanted to try their exquisite homemade style pizza. 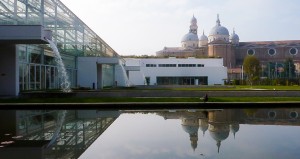 After the first day of tutorials and workshops, the conference started at the UNESCO World Heritage Site botanical garden, with its formal opening given by the general chair Nicola Ferro and program chair Fabio Crestani. During the opening, a speech by the Rector of the University of Padua, Rosario Rizzuto, introduced to the participants the University of Padua and how it did become worldwide renewed for its scientific achievements in the area of medicine, astronomy, philosophy and law. Achievements only possible thanks to the freedom provided by the Republic of Venice that made the University of Padua the only place in the world where certain investigations, forbidden everywhere else by the Inquisition, were still allowed. Finally, he concluded his talk with an anecdote to be proud of, especially now in a time of continuous searching for gender equality: the University of Padua gave the first academic degree to a woman, Elena Lucrezia Cornaro Piscopia.

The first ECIR 2016 keynote was given by the Karen Spärck Jones Award winner, Jordan Boyd-Graber from the University of Colorado. Jordan presented how the ubiquitous machine learning techniques, today used as a black box, through making it more interpretable, interactive and aware of human qualities, will lead to a future filled with fruitful and natural interactions with humans. Jordan also showed how he is moving in this direction, presenting a set of applications developed by his research group, where machines learn from humans and humans learn from machines.

Lunch was served on the terrace of the new area of the botanical garden, where a clear sky contrasted the old botanical garden and the Abbey of Santa Giustina in the background, for a perfect frame to many fruitful conversations. During the lunch break, the Woman in IR took place, organised by Laura Dietz and Maria Maistro, where our women colleagues had the chance to get to know each other and talk about their research interests.

In the afternoon, Maristella Agosti introduced the panel titled, “Data-Driven IR”. Maristella addressed the discussion talking about the shift in paradigm witnessed by the IR community, punctuated by three significant changes: 1) creation of test collections 2) moving from homogeneous to heterogeneous data 3) automatic extraction of data from scientific materials. The first panellist, Maarten de Rijke, pointed out that data-driven in IR is no longer about relevance but it is about the creation of a narrative. A narrative where both users and the search engines contribute interacting with each other. The second panellist, Omar Alonso, expressed a lack of obsession with data in IR with respect to other disciplines. The third panellist, Raffaele Perego, merged the observations made by the two previous panelists, also emphasising points of weakness, threats and opportunities of such new paradigm. The first comment from the audience was made by Donna Harman, who observed that the quantity of data available today has created a more task driven IR. From the discussion, Maarten remarked that the scientific praxis of first making hypotheses is fading away because now is the data that tells what to hypothesise. The panel concluded with a remarkable comment by Norbert Fuhr, who starting with a provocative question: “Where is the science in the data?”, continued pointing out that science is about being able to make predictions.

The day ended at Caffe Pedrocchi, situated in the old town of Padua. It is known as the ‘cafe without doors’, which, with its neoclassical decoration, has been the meeting place frequented by intellectuals, students, and politicians. Here, the poster and demo session took place, starting with ‘a minute of madness’ where the presenters of the posters and demos had the chance to introduce their work briefly. 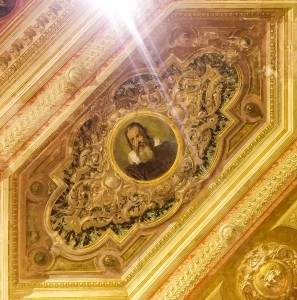 Galileo Galilei from the ceiling of his own Aula Magna

The third day, the conference moved to the Palazzo Bo, and in the same hall where Galileo Galilei used to lecture, the conference started with the second keynote talk given by the second winner of the Karen Spärck Jones Award, Emine Yilmaz from the University College London (UCL). Emine talked about the need to move towards task-based information retrieval with the goal of building search systems able to understand and support users who wish to complete tasks rather than just find information.

In the afternoon, for the second time in the history of the conference, the reproducibility session took place, where the papers accepted in its own research track, the Reproducible in IR, were presented. The results shown, during the oral presentations, produced a frighted experience to the audience due the difficulties encountered by the presenters to reproduce published papers that were supposed to be straightforward for the meticulous description provided in the selected papers.

At the end of the day, a social dinner was held at San Gaetano Cultural Centre where local food was served followed by a Grappa tasting session. Here, the words pronounced by the general chair Nicola Ferro at the closing of the past edition of ECIR: “… by the way, there is also food.”, resounded throughout the entire banquet hall. During the dinner, a number of awards have been given. The best short paper award went to for Martin Potthast et al. from Bauhaus-Universität Weimar for their work on clickbait detection. The best paper award went to Mengdie Zhuang et al. from the University of Sheffield for their work on the relationship between user perception and user behaviour in Interactive Information Retrieval evaluation. 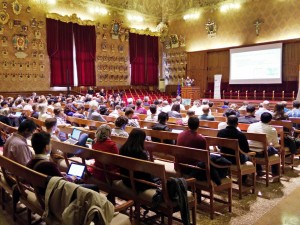 The last keynote of ECIR 2016 was given by the industry speaker Domonkos Tikk, CEO of Gravity R&D, who presented his experience in the recommender systems market and how they moved from research done in the context of the Netflix Prize to a successful business.

The conference closed in the afternoon with its formal closing ceremony done by the general chair, Nicola Ferro, whom the audience rewarded with a deserved standing ovation for the exceptional work done. Finally, the floor was passed to Ayşe Göken from Robert Gordon University, general chair of the next ECIR, ECIR 2017 that will take place in Aberdeen, Scotland. Ayşe also presented a new entry in the programme of the next edition, which for the first time in the history of ECIR will have a doctoral consortium.

To conclude, we would thank the ECIR 2016 organisation for the fantastic work done. And, with the hope that you enjoyed the conference as much as we did, we hope to see you all again at the next IR conference, SIGIR 2016, which be held in Italy too.

Aldo Lipani is Ph.D. Student at the Vienna University of Technology working on evaluation in Information Retrieval. Aldo’s main focus is on a) improving the reliability of the test collection based evaluation, in particular aiming at correcting the pool bias (the effect that documents that were not selected in the pool created from the original runs will never be considered relevant) and, b) developing an analytical approach to accessibility measures.