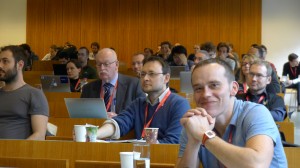 It was clearly a great success: over 70 people attended at the peak, although numbers did vary in the course of the day. Many people stayed right to the end and there was a lively discussion in the final session.
Following a welcome from Jussi Karlgren (Gavagai), one of the organisers, the day began with a keynote from William Stevens of Europe Unlimited, a network of European Venture Investors. William makes his living putting together investors with entrepreneurs with new business ideas, mainly in technology. He made the very valid point that what most entrepreneurs need is sales: they need customers who will pay, preferably in advance, for some early stage post-prototype or early version product. Once you have demonstrated their really is demand for your product, investors will have the confidence to invest, and new customers will have the confidence to buy.
Cool (and distinctive) technology is essential, as is a strong team with the necessary skills for success.

But the key thing is to get out to the customers early, listen to what they need, find someone whose problem you can solve, and get them to help you through the period of the equity gap, when you have costs and little or no income. This was a good talk, with much good sense from a knowledgeable and experienced individual. However I felt it was a bit too focussed on the B2B sector. The direct consumer and especially entertainment sectors are rather differently structured, and these were, hardly covered at all.
William Stevens talk was followed by a sort of open panel session, involving the whole audience, moderated by Jussi Karlgren. This session worked well, despite the challenge of holding a session of this sort in a long, rather narrow, raked lecture theatre. The focus was very much on investment, exit strategies, and related topics rather than technology.
The subsequent session was brought forward, after a minor revolt from the audience about finishing after five pm on the day before Good Friday.
So starting shortly before lunch, we had nine talks from various search specialist varying from the very young (Lumi, Signal, Unbabel, which were founded less than two years ago) to the long-established, if not venerable (Thomson Reuters, over 100 years). Inevitably it is difficult to provide a summary of such a large number of very varied (and fascinating) talks. However, a few messages came through: know your customers; be willing to pivot and adapt as circumstances change; there are plenty of companies which give people good livings without making them billionaires. 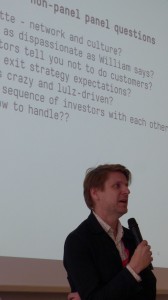 There were a couple of useful conclusions from the discussion session at the end of the day. First, the vast majority of Industry Day attendees had attended a tutorial or workshop on the day before the main conference, so scheduling the Industry Day at the same time as the workshops and tutorials would spilt the audience. Second ECIR (and especially Industry Day) had a large number of people looking for to hire people, and a large number of people looking for jobs, so perhaps we need a structured way of putting the two together.

Finally I’d like to thank the organisers Jussi Karlgren, but especially Paul Ogilvie from LinkedIn, who was unable to attend a really excellent Industry Day.

Further details may be found here.
There was also a bonus talk from Endre Jofoldi of Precognox.