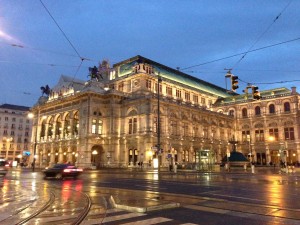 This year’s ECIR conference took place in Austria’s majestic, imperial capital city of Vienna. Hosted by the Information and Software Engineering Group at the Technische Universität Wien (the Vienna University of Technology), the conference ran from Sunday the 29th of March until Thursday the 2nd of April. The University itself (and consequently the recommended hotels) is situated just outside of the city centre, allowing attendees to explore the opulent historical heart of the city and indulge in some of the city’s world-famous schnitzel.

The conference began on the Sunday with an unusually large selection of workshops and tutorials on offer – 5 tutorials and 5 workshops in all, 3 of which lasted the whole day. The current issues facing researchers in our field were well represented with topics ranging from gamification of IR (the Second International Workshop on Gamification for Information Retrieval (GamifIR’15)) and applications of IR in the medical profession (Multimodal Retrieval in the Medical Domain (MRMD 2015)) to slightly more “traditional” topics such as complex search tasks (Supporting Complex Search Tasks). I attended the workshop on Context-awareness in Retrieval and Recommendation (CaRR) where there was an insightful keynote by Gareth Jones and a number of interesting paper presentations. There was discussion from most of those present on issues such as life-logging and context, a topic strongly related to the work of the keynote speaker, behavioural change and the ethical considerations of recommender systems and contextual search. These events seemed to be well attended, particularly early in the day – despite the 9am start time – however participation did seem to tail off slightly in the afternoon.

The workshops and tutorial sessions were followed on the Sunday evening by a reception event during which general chair Andreas Rauber welcomed attendees, promising an exciting formal schedule punctuated by a lavish social programme with ample opportunity to try some local wines. On Sunday evening these wines, coupled with cheeses, bread and pretzels, provided the ambiance for chats about the world of academia and research, not to mention the occasional gripe about students back home!

The conference proper began on the Monday morning with an official welcome from the organising committee and some very interesting statistics about the conference delivered by programme chair Allan Hanbury. These revealed, among other things, that there was an incredibly enthusiastic reviewer who had contributed over 25 thousand characters worth of sage advice to some lucky authors. At the other end of the scale, one reviewer (who, thankfully, remained nameless) wrote only around 100 characters! The brief welcome was followed by the first of 3 excellent keynotes, given by Marti Hearst, in which she told the audience what she would like to see researched in future, no doubt engendering thoughts of next year’s ECIR in the minds of a number of attendees. I suspect she’s right in saying that in the future we’ll need to focus more on difficult, more niche search tasks.

After a short interlude for coffee the technical programme kicked off with a single session on Reproducible IR, chaired by veteran information retrievalist Norbert Fuhr. In my opinion this was an interesting and worthwhile addition to the usual schedule as it required authors to reproduce a previous experiment/set of experiments, a key underlying component of the scientific process and one which is perhaps not as well represented in our field as it could be. Following lunch there was a panel discussion about whether evaluating IR should be seen (and approach as) a technical or social science with Jaap Kamps and Udo Kruschwitz defending the Cranfield Model and Diane Kelly and Norbert Fuhr arguing against. Perhaps unsurprisingly there was a lot of participation from the audience and some fairly heated debate. Although the general consensus was that we don’t need to necessarily abandon our models, the issue of reproducibility was brought up again with Norbert Fuhr stating that we should be more concerned about this if we truly wish to be considered a science. The spirit of debate was certainly not dampened by the arrival of a selection of wines for the panel members, an event which led, inexorably, to the coining of the term “boozification” by Carsten Eickhoff.

The afternoon concluded with parallel sessions – one on Topic Models, the other on Evaluation. After Monday’s talks were over the foyer area transformed into a hive of activity in preparation for the poster and demo session. As always, these generated a lot of discussion, both in front of the posters and demos themselves and also around the various tables and seating areas. 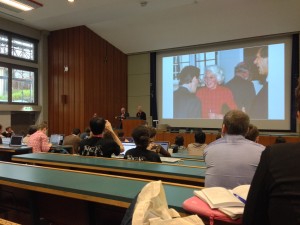 Tuesday began with the presentation of the Karen Spärck Jones award which this year was given to Ryen White of Microsoft Research. The presentation, made by John Tait, was followed by Ryen’s timely keynote on health and medical IR, an area which Ryen and his colleagues have extensively researched in recent years. The keynote discussed recent work at Microsoft Research on how people search for medical information on the Internet and how search engines tend to misrepresent the likely reasons for many symptoms, leading searchers to believe they have a much more serious (and less common) illness than they actually have. Later work has seen attempts to predict when people will need to use hospitals and medical resources, based on their search behaviour.

The rest of the day’s programme was filled with 3 sets of parallel sessions, leading up to the main social event of the conference: the conference dinner at Palais Niederösterreich in the centre of Vienna. The Palais was, as one would expect from the name, very opulent and provided an ideal setting for the dinner and the giving of prizes to their worthy winners. The usual awards for best paper, poster and demo were given out as well as no fewer than 4 reviewer awards. Once these had been presented and the winners suitably congratulated, the drinking, eating and conversing went on long into the night (and early morning). 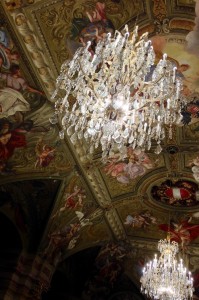 The schedule for Wednesday was somewhat different, starting as it did with 2 sets of parallel sessions leading on to a final session on Aggregated Search and Diversity which featured the best paper “Exploring Composite Retrieval from the Users’ Perspective” by Horatiu Bota, Ke Zhou and Joemon Jose. The late afternoon slot was filled with a final keynote by Stefan Thurner entitled “What to Do If You Know Everything? Studying Human Behavior in a Virtual World”. This was a somewhat unusual, but nevertheless inspired, choice as Professor Thurner is neither a computer nor information scientist. The talk considered what could be learnt about society and human behaviour if only we could observe and record all of the actions people perform and the decisions they take, something which Thurner and his colleagues had done in the rather more controlled setting of an online multiplayer game. The work has confirmed old adages such as “the enemy of my enemy is my friend” and indicated, somewhat controversially, that being wealthy in not about luck but is instead structural and that women are in general nicer than men but can act more extremely when crossed!

The academic part of the conference concluded with a short closing ceremony from the general chairs and a brief advert by Nicola Ferro for next year’s conference, which will take place a little earlier in the year in sunny Padua, Italy. I think all attendees would agree with me when I say that ECIR 2015 in Vienna was an unqualified success, congratulations go to all of the organisers for hosting such an excellent conference.

More information about the event, including a list of accepted papers, can be found on the ECIR 2015 conference website.

Morgan Harvey is a senior lecturer in the department of mathematics and information sciences at Northumbria University in the United Kingdom. He received his PhD in information retrieval from Strathclyde University in 2011 and completed 2 post-doc positions in Erlangen, Germany and Lugano, Switzerland. His current areas of interest for research include personalisation and topic modelling, search and refinding behaviour and recommender systems with a focus on health and nutrition,