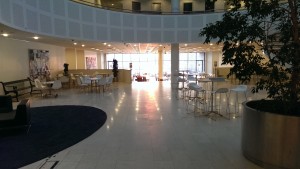 The 3rd Open Interdisciplinary MUMIA Conference and 7th Information Retrieval Facility Conference (IRFC’2014) was held at Aalborg University Copenhagen, Denmark on 11-12 November 2014. The conference is a continuation of the symposia and conferences of the former Information Retrieval Facility and has since 2012 been co-organised with the IC1002 MUMIA COST action on Multilingual and Multifaceted Interactive Information Access. The venue was the new Copenhagen Campus of Aalborg University located in the South Harbour in the former buildings of NOKIA’s main R&D lab, and was hosted by the Information Analytics research group of the Department of Communication and Psychology. IRFC’2014 had 60 participants from 22 countries, mainly European.

The purpose of the IRFC conferences is to provide a multidisciplinary scientific forum for researchers in Information Retrieval and related areas. The conference aims at bringing young researchers into contact with the industry at an early stage, emphasizing the applicability of IR solutions to real industry cases and the respective challenges.

The program consisted of one keynote, 11 peer reviewed paper presentations, two panels, a MUMIA Management Committee Meeting and a social dinner at Restaurant SULT. The program chairs of the scientific program were David Lamas of Talinn University (Estonia) and Paul Buitelaar of the Insight Centre for Data Analytics, National University of Ireland, Galway. IRFC’2014 received 13 quality submissions from ten different countries, of which ten were accepted as full papers and one as an industry paper. Each submission was reviewed by three Program Committee members and the proceedings were published in the Lecture Notes of Computer Science series as LNCS 8849 by Springer. Keeping in line with the objectives of the IRFC to provide a multidisciplinary scientific forum to bring young researchers into contact with industry at an early stage, this year’s program covered a wide range of topics, from fundamental IR issues to domain-specific applications and the evaluation of IR systems. 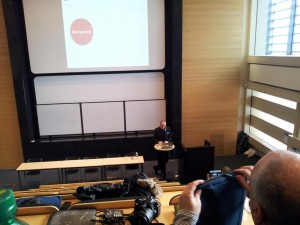 Hasmik Osipyan, April Morton, and Stephane Marchand-Maillet (“Fast Interactive Information Retrieval with Sample-Based MDS on GPU Architecture”) address content-based image retrieval (CBIR). They present a fast interactive interface for CBIR based on implementations of fast k-means clustering and a new fast SBMDS on GPU architectures. The evaluation was performed using standard datasets of Mayan hieroglyphs and demonstrated the effectiveness of their interactive interface at interactive speeds. They also show that using GPU architecture for the SBMDS algorithm results in much better performance compared to the existing algorithms on the CPU as well as on the GPU. Serwah Sabetghadam, Mihai Lupu, and Andreas Rauber (“Which One to Choose: Random Walks or Spreading Activation?”) address the challenge of “intelligently” traversing graphs of data objects exploring the associations between them. Linda Andersson, Helena Rastas, and Andreas Rauber (“Post OCR Correction of Swedish Patent Text”) compare two basic post-processing algorithms for correction of optical character recognition (OCR) errors in Swedish text. Finally, as for fundamental IR issues, Aldo Lipani, Florina Piroi, Linda Andersson, and Allan Hanbury (“Extracting Nanopublications from IR Papers”) give an account of their experience with extracting the necessary data to possibly reproduce IR experiments. They also make considerations on automating this information extraction and storing the data as IR nanopublications that can later be queried and aggregated by automated processes.

Further, some contributions relate to the topic of citation analysis: Dror Mughaz, Yaakov Hacohen-Kerner, and Dov Gabbay (“When Text Authors Lived Using Undated Citations”) address the challenge of finding in which years an author was born and died, based on his documents and the documents of dated authors who refer to the author under discussion or are mentioned by him; and Niels Dalum Hansen, Christina Lioma, Birger Larsen, and Stephen Alstrup (“A Study of Temporal Context for Authorship Attribution”) investigate temporal aspects of authorship attribution, a task that aims to distinguish automatically between texts written by different authors by measuring textual features. 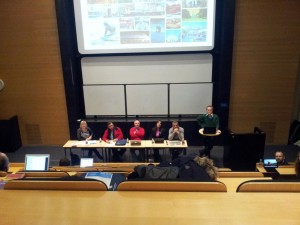 Finally, a couple of contributions target the evaluation of IR systems: Fernando Loizides and Barrou Diallo (“Using Eye-Tracking to Investigate Patent Examiners’ Information Seeking Process”) present a methodology that was tested for using eye-tracking to record patent examiners’ visual attention during patent triage. Their findings present ways that the eye-tracker can complement current metrics for evaluating information-retrieval tools, as well as the ability to investigate further behaviors and actions that cannot be done by currently employed methods; and Michail Salampasis, Anastasia Giachanou, and Allan Hanbury (“An Evaluation of an Interactive Federated Patent Search System”) evaluate PerFedPat, an interactive patent search system designed to assist patent examiners to complete the demanding patent search tasks by using the set of search tools most suitable for the task at hand, based on the federated search approach and the ezDL framework. Their results demonstrate the feasibility of using integrated and federated systems for professional search.

The keynote was given by Professor Maarten de Rijke from the Informatics Institute at the University of Amsterdam, the Netherlands. He spoke on “Don’t Hurt Them: Learning to Rank from Historical Interaction Data”, addressed interactive information access, mining interaction logs, and reasoned about the algorithmic lessons that can be learned from such mining activities, all paramount topics in the context of IR. The first panel, chaired by Kalervo Järvelin, was on “Professional Search in a Modern World” and had as members Fabio Crestani, Gabriella Pasi, Christian Boitet, Stephane Marchand-Maillet and Elaine Toms.

IRFC’2014 also marked the final year of the MUMIA COST action. The MUMIA Management Committee Meeting was focussed on reporting results from the outcomes of the MUMIA Working Groups and served as an evaluation of the action, with COST office representatives present. A final panel, chaired by John Tait, focussed on “The Next Steps after the MUMIA COST Action” and had Fernando Loizides, Mihai Lupu, Laurentiu Vasiliu and  Mike Salampasis as members.

We thank all of the above for making the 3rd Open Interdisciplinary MUMIA Conference and 7th Information Retrieval Facility Conference (IRFC’2014) a success. Special thanks go to the program committee members, the student volunteers, the MUMIA COST action and Mike Salapasis, Mihai Lupu, Fernando Loizides and Hanna-Liisa Pender for support and advice – as well as to the conference sponsors Spinque, Springer and Det Obelske Familiefond.

Finally, it is worth noting that IRFC continues as a conference. The steering committee invite interested research groups to send a manifestation of interest, with the aim of organising IRFC’2015 in November-December 2015 – see http://irfc.at/ for more information.

Birger Larsen is Professor of Information Analysis and Information Retrieval at the Department of Communication and Psychology, Aalborg University Copenhagen (Denmark).