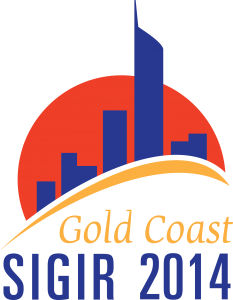 The 37th Annual SIGIR Conference was held at Gold Coast, Australia in July 2014. The conference was chaired by Shlomo Geva and Andrew Trotman and organised with support from QUT, RMIT, The University of Melbourne and The University of Otago. Located at the Gold Coast Convention and Exhibition Centre, the venue was just a 5 minute walk from 35 miles of beautiful Australian coastline.

SIGIR started with the Doctoral Consortium where I’d kindly been asked to present in the Senior Student Boasters session, a new addition to the consortium where senior PhD students spoke for 5-10 minutes about their research and experience. Having not attended a consortium before, I found it to be one of the most informative conference experiences I’ve had. The mix of leading industrial practitioners and academics in the same room as myself and a number of my PhD peers resulted in a day of interesting conversation, 1 to 1 mentoring  and lively debate, with ‘Industry vs. Academia’  being the defining argument of the day.

I did not attend any of the tutorials as I was busy preparing and delivering my own tutorial! Presented alongside Grace Hui Yang and Emine Yilmaz, the tutorial ‘Dynamic Information Retrieval Modeling’ concerned the application of reinforcement learning techniques to probabilistic IR models with a focus on Partially Observable Markov Decision Processes (POMDP) and Multi-Armed Bandits (MAB). (Shameless Plug) It’s a concept that my PhD thesis is heavily based around and you can find out more on the tutorial website and the slides can be viewed and downloaded on SlideShare. Otherwise, I’ve since checked out Ben Carterette’s tutorial on ‘Statistical Significant Testing in Theory and in Practice’ which has helped me re-evaluate how I go about hypothesis testing in my own experiments. Following the tutorials was the welcome event, held in the conference venue and followed by an exploration of nearby Broadbeach’s bars and restaurants. 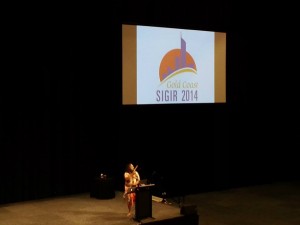 The conference began with a traditional aboriginal blessing before giving way to Susan Dumais’ fantastic keynote ‘Putting Searchers into Search’. Susan argued that modern IR models, evaluation and systems often forget about the person who is actually using the system and what their motivations and goals are. A great talk by Leif Azzopardi on ‘Modelling Interaction with Economic Models of Search’ (which received an honorary mention for Best Paper) stood out in the ‘Risks and Rewards’ session, which preceded his inspiring talk at the student lunch. The student lunch itself was a highlight of the day, where students were treated to talks by Leif, Susan and James Allan and given the chance to unobtrusively mingle with leading researchers and each other, really helping to establish the feeling throughout the conference that the barriers between students and researchers didn’t exist. 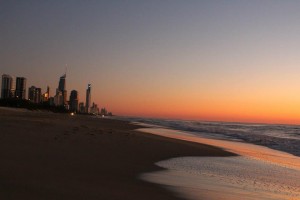 Many of the delegates took advantage of the location by starting the day with an early morning jog along the coast whilst the sun rose. Otherwise the day started with Marti Hearst’s keynote on ‘Seeking Simplicity in Search User Interfaces’ which touched on her thoughts and experience with designing user interfaces for IR. The afternoon’s poster and demo session was a good opportunity to network with researchers and find out about up and coming new ideas. The day ended with the banquet hosted in one of the halls of the convention centre where it was announced that Giuseppe Ottaviano and Rossano Venturini had been awarded best paper for ‘Partitioned Elias-Fano indexes’, Dmitry Lagun et. al. were awarded best student paper for ‘Towards better measurement of attention and satisfaction in mobile search’ and a new award, the Test of Time Award, given to authors of research papers 10 to 12 years old that have since proven to be influential, was awarded to Cheng Xiang Zhai et. al. for their paper ‘Beyond independent relevance: methods and evaluation metrics for subtopic retrieval’.

A few early risers crowded into the nearby casino bar to watch the second football World Cup semi-final between the Netherlands and Argentina before the final proceedings started with Hugh Williams’ keynote ‘The Data Revolution: How Companies are Transforming with Big Data’. Despite a few technical issues with his slides, Hugh gave an effective overview of how the type, size and availability of data has changed over the past few decades and what this means for future business and research. The day saw out the remainder of the sessions, many of which were imaginatively named such as ‘Scents and Sensibility’, ‘Auto-completio’ and ‘Brains!!!’. A new conference based around human computer interaction in information retrieval called CHIIR was announced at the SIGIR business lunch, whilst SIGIR 2016 was announced for Pisa in Italy and SIGIR 2017 in Tokyo, Japan.

I will confess to missing the workshops so that I could fly to Sydney to spend a few days travelling, but have since checked out the work in PIR’14: Privacy-Preserving IR: When Information Retrieval Meets Privacy and Security which may lead to improving access to commercial search logs for academics, and TAIA’14: Temporal, social and spatially Aware Information Access where research utilising aspects of time is discussed, which is of relevance to my tutorial topic.

The conference was a great opportunity to meet academics, researchers in industry and other students from all over the world, was smoothly run and beautifully located. I’m already looking forward to SIGIR 2015 which will be held in Santiago, Chile.

Marc Sloan is a senior graduate student completing his PhD thesis in University College London. His background is in information retrieval, machine learning and financial computing and his thesis is on dynamic IR. His research interests in information retrieval include applying reinforcement learning techniques such as multi-armed bandits and POMDPs to IR learning systems over time, contextual session search and query suggestion.