SIGIR 2013 was hosted by CNGL (Centre for Next Generation Localisation) which is based in Dublin City University and Trinity College Dublin. The main conference was held at Trinity College Dublin with plenary sessions held at the mansion house just 100 yards away. The busy five day schedule consisted of three days of main conference proceedings (including an industry day), sandwiched by a day of tutorials and a day of workshops respectively.

Sunday was a busy day consisting of tutorials and a doctoral consortium. As I was just flying into Dublin airport that afternoon, I was unable to attend any of the tutorials. Fortunately, I did make it to the welcome reception. The welcome reception was held in the Guinness storehouse. Delegates undertook a tour of the storehouse to learn about the brewing process and the history of the famous drink, before sampling a pint of Guinness in the bar at the top of the storehouse. The bar afforded delegates a 360 degree view of Dublin’s cityscape, although most were busy chatting after a packed day of tutorials and/or simply catching up with friends in the relaxing atmosphere.

Monday morning saw the opening of the main conference with a panel session which celebrated 20 years of web search. Alan Smeaton chaired the lively discussion which included Jonathon Fletcher (creator of the JumpStation search engine), Stephen Robertson (Microsoft and UCL), Ricardo Baeza-Yates (Yahoo!), and Paddy Flynn, (Google Ireland). The panel session concluded with Stephen being presented a book, that comprised tributes from those who had the pleasure of working with him, to mark his retirement.

I attended the first session on User Behaviour. Ryen White presented a paper (which was subsequently to be awarded best paper) that studied biases in users and in search engines. It was found that both users and search engines have a bias towards “yes” answers to certain types of questions. The session concluded with an interesting and timely paper presented by Mikhail Ageev on the patterns and behaviour of search engine switching. 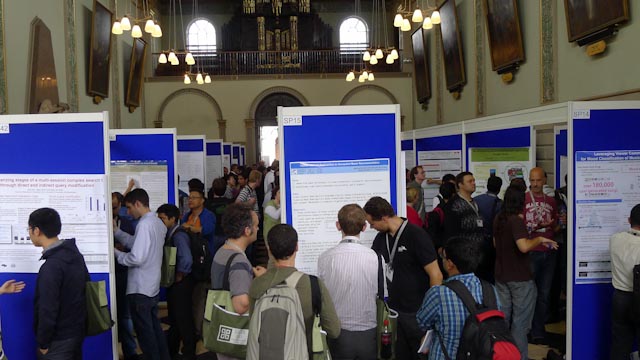 Monday and Tuesday saw the incorporation of the short paper sessions into the main conference for the first time. Monday’s short paper session was busy and there was particular interest in posters where there was free confectionery on offer. A particularly interesting poster that studied “Temporal Variance of Intents in Multi-faceted Event-driven Information Needs” was presented by Stewart Whiting.

In the late afternoon, I attended an excellent efficiency session chaired by James Allan. A paper I found particularly interesting was “Faster and Smaller Inverted Indices with Treaps” and was presented by Roberto Konow. He showed that the use of Treaps in an inverted index, instead of the typical postings list, is an elegant solution. Importantly, he showed how this could speed up the processing of certain types of queries.

The evening’s entertainment consisted of a Ulyssian walking tour of Dublin ending with a traditional music session in a public house.

Tuesday’s keynote at the Mansion House was entitled “Riding the Multimedia Big Data Wave” by Dr. John R. Smith of the IBM T.J. Watson Research Center. John espoused the virtues of using semantic modelling to provide an effective framework for classifying and retrieving image and video content. By means of using large volumes of data and sophisticated machine learning techniques, the research presented in his talk went some way towards ‘bridging the semantic gap’.

In the models and ranking session that followed, Fiana Raiber presented an interesting paper that showed that an increase in retrieval effectiveness could be achieved by clustering an initial retrieved result-list and then by ranking those clusters using an approach that uses Markov Random Fields. 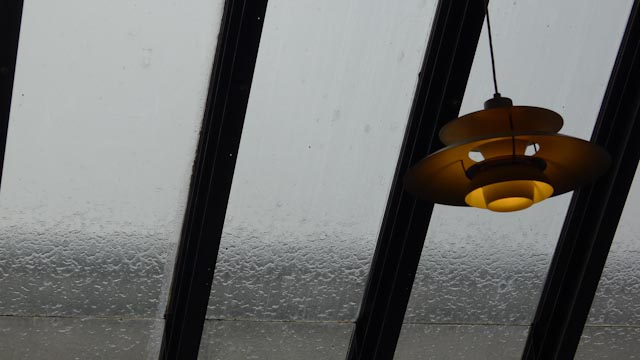 I took the subsequent “lunch on your own” intermission literally, and strolled up to Stephen’s green to watch the swans. Afterwards the short paper session was even busier than Monday’s (which I’m sure had nothing to do with the fact that it was pouring raining outside).  We were again rewarded with some excellent short papers such as those by Stefan Raue and Leif Azzopardi entitled “#trapped! Social Media Search System Requirements for Emergency Management Professionals”. In the late afternoon, the “time” session concluded with an interesting talk about “cross-temporal” retrieval, an aim of which was to automatically translate terms that had become morphologically different over time to a common form.

In the evening, the main conference banquet was held in Croke Park (the home of Gaelic games in Ireland). Delegates were welcomed to the museum of the 82,300 seater stadium and wandered around to appreciate its role in some of the most important moments in Irish history. Delegates also tried their hands at hurling and football, with rather mixed results, before sitting down to dine. The best paper was announced as that of Ryen White (as mentioned earlier). Later some traditional Irish dancing ensued and some braver delegates rushed the dance floor to roll back the years, with what could be generously described as, a rather loose interpretation of dancing.

Wednesday saw the addition of industrial practitioners to the conference. The industry day was even more popular than it had been in recent years and begun with an interesting talk by Ricardo Baeza-Yates on the topic of user engagement. The day continued with a full session devoted to Search Verticals, and sessions that comprised topics such as Big Data, Open Source Search, and sentiment analysis. Hugo Zaragota concluded the presentations with a talk entitled “Some of the Problems and Applications of Opinion Analysis” which presented some of the techniques employed by Websays to understand the sentiment associated with certain social media data available today.

The closing session consisted of an eloquent summary of the proceedings and of some multimedia research that the organisers had been working on during the day (available here).

A few of us delegates headed off to eat some Mexican food. I sat at a table with with Robert Villa, Martin Halvey, and Gene Golovchinsky, who sadly passed away only a few weeks later. It was the first time I had met Gene, but I was instant fan of his type of satirical pun laden humour. The IR community will miss him greatly.