Introduction – IR Made In Germany

2012 marked an exciting year for the German Information Retrieval community, when for the first time ever with Norbert Fuhr a German was awarded the prestigious Gerard Salton Award. Besides being a well-deserved personal award, this brings with it a nice appreciation of the work performed by the German IR groups and it also reflects the growing importance information retrieval gains in industry and academia in Germany. In addition to the fact that some of the steering committee members of the BCS IRSG are actually German, this is enough motivation to have a closer look at “IR Made in Germany”. In this Informer issue, we will therefore start introducing the German IR Special Interest Group and some of the growing number of German IR groups.

Similar to the BCS IRSG in the UK, the German IR Special Interest Group (SIG) invites professionals, both academics and practitioners, in the German speaking countries to contribute to the development of information retrieval. The German IR SIG is part of the German Informatics Society (Gesellschaft für Informatik e.V. (GI)), the German BCS analogue. The SIG currently consists of 227 registered members. Among its goals is the discussion and exchange of experience of IR-related problems and the knowledge transfer between practitioners, developers, users of information retrieval systems as well as researchers at universities and research institutes. Part of the mission is to learn about the respective problems and integrate the different views of these homogeneous groups. On the one hand developers of IR systems should learn about the latest research results; on the other hand researchers should tackle “real life” problems coming from industry. 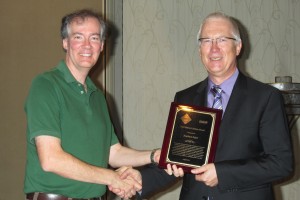 The German Special Interest Group was established in 1991 at a German IR workshop held in Darmstadt. More than 20 years later some of the topics discussed at that workshop – like machine learning in IR (linear and logistic regression), IR evaluation (recall and precision) and hypertext systems (now mainly discussed in the context of Web IR) – are still relevant. Invited speakers at the Darmstadt workshop were Keith van Rijsbergen and Bruce Croft, which indicates the strong relationships the group has been maintaining from its beginning with their British and American peers. This continued in the follow-up workshop in 1993 in Regensburg where Karen Spärck Jones, Ed Fox and Nick Belkin were keynote speakers.

To support its mission, the German Special Interest Group has been co-organising several national and international conferences in Germany. Examples are the Hypertext, Information Retrieval, Multimedia (HIM) conferences in 1995 and 1997, respectively. Another example is ECIR 2001, which was held in Darmstadt as a joint event of the British and German IR SIGs.

In 2007 the German IR workshops found a new home under the roof of the “Lernen, Wissen, Adaption” (Learning, Knowledge, Adaptation, LWA) annual conference series, which is held by the IR group in conjunction with the German Knowledge Discovery, Data Mining and Machine Learning, the Knowledge Management and the Adaptivity and User Modelling Special Interest Groups. LWA consists of the respective workshops of each single SIG. Its aim is to provide a joint forum for experienced and young researchers and practitioners as well as to promote the interaction among the participating SIGs. LWA 2013 together with the 2013 Information Retrieval Workshop will take place October 7-9 in Bamberg. In the tradition of previous workshops English submissions, especially coming from students who would like to discuss their ideas with world-leading experts, are very welcome.

Together with the German Database SIG the IR group is running a journal called Datenbank-Spektrum, published by Springer. The journal welcomes English and German manuscripts in the areas of information retrieval and databases. Several special issues focus on current research topics in these respective areas. The editorial board consists of established members from academia and industry.

Besides conferences, workshops and its journal, the SIG strives to enhance the IR landscape in Germany by introducing and teaching established and cutting-edge IR methods and developments. To this end the special interest group has proposed a curriculum for teaching IR in computer science. The extensive teaching experiences of the SIG members are reflected in an article on concepts and practical considerations for teaching IR. While the theoretical content that should be part of IR courses is discussed, the suitability of the available tools and systems is reflected as well. Above article is available in English.

Participants of the 2012 IR Autumn School

Addressing an audience from postgraduate level and above, the SIG is running IR autumn schools that have been taking place mostly every other year since 1998. The school’s goal is to introduce and teach current research topics and latest developments to an audience of practitioners as well as students and young researchers. Tutorials are held by world-leading experts in their respective field. Students are asked to present and discuss their work with senior researchers. The autumn school takes place in the inspiring ambience of Schloss Dagstuhl, where experts exchange their ideas usually over a cheese platter and a glass of wine or fine German beer. The exchange of knowledge and ideas and their discussion in a relaxing atmosphere, embracing the unique “Dagstuhl spirit”, make the autumn schools an excellent opportunity for students to get in touch with senior researchers. These contacts usually last longer than the school’s one productive week of exchange, dialogue, work and fun.

The German IR SIG will continue its mission to bring together senior and junior practitioners, users, students and researchers from industry and academia to foster a fruitful knowledge transfer. Besides LWA 2013 there is the next IR autumn school under preparation that will take place in September 2014. In addition to the exchange with German SIGs from related areas like knowledge management, databases, data mining, machine learning and life sciences, a further aim is to increase the collaboration among the European IR SIGs. This article, which will be echoed by an article about the BCS IRSG to be submitted to the German Datenbank-Spektrum, is meant to be one step in this direction.

Ingo is Reader in Data Science at the University of Wolverhampton, UK. His research focuses on different aspects of information retrieval, in particular formal models for user-oriented search and digital libraries, with emphasis on polyrepresentation, annotation-based retrieval, interactive quantum-based IR and probabilistic and logic-based models. Ingo is actively sharing his passion for information retrieval and digital libraries on Twitter where he is known as @iFromm.