As in recent years, ECIR 2011 was preceded by a day of workshops and tutorials. The Workshops & tutorials were held at the Guinness Storehouse, located in the heart of the St. James’s Gate Brewery in Dublin city centre and is Ireland’s No. 1 international visitor attraction, attracting over 4 million visitors since 2000. At ECIR 2011; we accepted five workshops and four tutorials, both based on a committee-lead selection process. The workshops covered a range of topical issues in Information Retrieval:

The posters and tutorials day closed with the welcome reception also held at the Guinness Storehouse. This proved popular with attendees who were able to browse the exhibition section of the Storehouse which describes the history of Guinness, including many examples from the famous advertising campaigns. The reception itself was held in the gravity bar at the top of the building which gives a panoramic view across Dublin.  This event proved so popular that some attendees stayed late into the evening until asked to leave by the staff who wanted to close for the night. 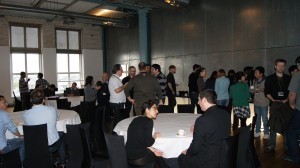 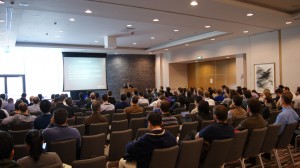 Regarding the actual programme itself, ECIR 2011 received a total 355 submissions across four categories; 223 full-paper submissions, 48 short paper submissions, 52 poster submissions and 12 demonstration submissions. Of these submissions, 65% were from Europe, 19% from Asia (19%), 13% from North and South America (13%) and 3% Middle East & Africa. Of the 223 full papers submitted, 45 were selected for oral presentation which equates to a 20% acceptance rate. For short papers, a total of 17 were accepted for oral presentation. In addition, 24 posters and 6 demonstrations accepted for ECIR 2011. All submissions were reviewed by at least three members of the 168 person International Programme Committee. The PC meeting took place on the 2nd December 2010 at UCL, London (thanks to Jun Wang for organising) and it was attended by twenty members of the PC committee. We are pleased to note that ECIR maintained its student focus with 62% of the accepted publications having a student as the primary author.

The two invited keynote speakers, Kalervo Järvelin and Thorsten Joachims, gave stimulating contributions to the conference and the third keynote was delivered by Evgeniy Gabrilovich, the 2010 BCS/BCS-IRSG Karen Spärck Jones Award. Evgeniy Gabrilovich won the award in recognition of his contributions to advance our understanding of IR and NLP through experimentation. The award itself commemorates the achievements of Karen Spärck Jones. It is given annually to encourage and promote talented researchers who have endeavoured to advance our understanding of Information Retrieval and/or Natural Language Processing. 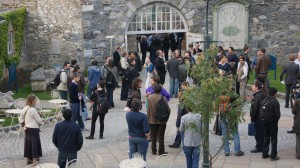 The conference banquet was held at the unique and picturesque venue of The Village at Lyons Demesne in County Kildare (just outside Dublin). The unseasonably mild weather meant that we able to hold the reception outside before venturing inside the dinner.

Following the success of previous BCS events, an IRSG Industry Day was organised (in parallel with the last day of the ECIR 2011 conference) that provided a topical selection of talks, panels and case studies from the world of search and information access with a focus on issues pertaining to IR practitioners.

Special thanks go to our wonderful team of organisers, Wessel Kraaij (posters chair), Vanessa Murdoch (demos chair), Leif Azzopardi (wokshops chair), Evangelos Kanoulas (tutorials chair), Nicola Stokes (student mentor chair) and the members of  our PC committees for their work in selecting our ECIR 2011 programme. We also acknowledge the commitment of our local organisation team including Hyowon Lee (Proceedings & Advertising chair), our website team of David Scott and Daragh Byrne and our local arrangements team of Colum Foley and Peter Wilkins. In addition, we wish to thank all authors who spent their time and effort to submit their work to ECIR 2011, and all of the participants and student volunteers for their contributions and valuable support. Our gratitude also goes to the ECIR 2011 Programme Committee Members, the Award Committee members and other invited reviewers for the thousand reviews required for ECIR 2011. Finally, we wish to acknowledge the significant support of our sponsors; Science Foundation Ireland, Dublin City University, Fáilte Ireland, Google, Bing, MSR, CLARITY Yahoo!, CNGL.

Cathal Gurrin is a lecturer at the School of Computing at Dublin City University, Ireland and currently a visiting researcher at the University of Tromso, Norway. His research interest is in human digital memories and the challenges of developing a new generation of search-engine and content-understanding tools to support users in gathering and searching huge personal lifelog archives.